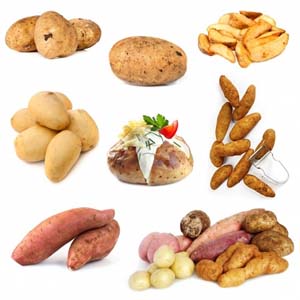 With the advent of the New Year, many of you are considering or already began a paleo diet versus just a gluten free diet. A paleo diet is gluten free as the paleo diet avoids all grains as well other food. It mimics the diet of cavemen, which was over 333 generations ago. The question I am asked most about the paleo diet is, “Are potatoes Paleo?”

While many paleo dieters consume potatoes because they are not a grain, there are many versions of the paleo diet, as well as potatoes. You will learn the answer to this question below and when white and sweet potatoes were introduced. I hope you find this information useful.

Ad [showmyads]
When Did Cavemen Live on Earth? The Middle Paleolithic and the Middle Stone Age broadly spanned between 300,000 to 30,000 years ago, depending upon the region. When Was the White Potato Introduced? White potatoes were domesticated between 7,000–10,000 years ago. Are Sweet Potatoes Paleo? Over 2700 years ago, sweet potatoes were introduced. Are Yams Paleo? I could not find any dates on when yams were introduced to our diets. It is probably because they are native to Africa and Asia. However, in the United States, yams are usually from Florida and are just a different variety of sweet potato. In addition, another plant, the oca, is also called a “yam” in many parts of Polynesia, such as New Zealand. To clarify this issue, the United States Department of Agriculture mandates that sweet potatoes labeled as “yams” must also be labeled as “sweet potatoes”. What Does All This Mean? While potatoes are not a grain, they did not exist during the Paleolithic period or Middle Stone Age. Cavemen did not consume potatoes; nor were they available. Are Potatoes Bad For Us? No. Potatoes are not bad for us. It just means that if you truly desire to eat only what cavemen ate, then you would avoid potatoes. Potatoes are high in starch/carbohydrates. Carbs turn into sugar in our bodies and elevate our blood sugar levels. My motto is to eat carbs in moderation. You can obtain plenty of carbohydrates from fruits and vegetables. Are Potatoes a Grain? As stated above, potatoes are not a grain. They are tubers (root vegetables) that grow underneath the ground. If you are on a grain-free diet, potatoes make an excellent substitute for grains as they contain fiber, potassium, and other nutrients. How Can I Bake with Potatoes on a Paleo Diet? Fresh potatoes may be mashed and added to baked goods to create moisture, just as butter and oil do. They make an excellent substitute for butter in cakes along with a bit of oil. How Can I Bake with Potatoes on a Grain-Free Diet? You can use fresh potatoes in your gluten-free grain-free baking the same as above under the Paleo diet. You may also use ingredients such as potato flour and potato starch in gluten-free grain-free baking. In the United States potato flour is light yellow in color and has a texture between rice flour and millet flour. Use potato flour as a substitute for rice, sorghum, millet, buckwheat, and gluten-free oat flours. You may also use it to thicken gravies. In the United States potato starch is white in color and has a similar texture to cornstarch. In some countries, it is named, “potato flour”. Like cornstarch and tapioca flour, it makes gluten-free baked goods light in texture and weight. Use potato starch in equal amounts to substitute cornstarch. Tapioca starch has a bit of chewy texture once baked; therefore, substituting potato starch for tapioca flour will change the texture of the baked goods. Does This Site Have Any Paleo Recipes? All of my grain-free recipes may be found in the Gluten-Free Grain-Free Recipes category. Some are paleo while others contain potatoes, potato starch, or tapioca flour. Compared to Grains How Abundant Are Potatoes? Potatoes are the fifth largest crop in the United States. In order of largest first, they consist of wheat, corn, rice, sugarcane, and potatoes. Wheat is a not permitted on a gluten-free, grain-free, or paleo diets. Corn is not allowed on a grain-free or paleo diets. Sugarcane is not allowed on a Paleo diet. In regards to potatoes, it is up to you. They are not truly paleo but are allowed in a grain-free and gluten-free diet. Most versions of the Paleo diet allow yams, while others also allow sweet potatoes. Summary While potatoes are not Paleo, it depends upon the purpose of being on a Paleo diet. If you find that a grain-free diet is the main reason, you may enjoy potatoes. If you wish to avoid carbohydrates, then you will want to avoid white potatoes as they, like rice, are full of carbs. Sweet potatoes contain fewer carbs, and true yams are extremely healthy and are unrelated to sweet potatoes. Though, in the United States, yams are just a variety of sweet potato. To find true yams, purchase them at Asian markets. A true Paleo diet consists of mainly meat, seafood, and fresh fruits and vegetables. Be extremely careful when on a low-carb diet as it can negatively impact your thyroid gland. Be sure to consume lots of fruits and vegetables to get the carbs your body needs. Remember, the Paleo diet was created by an individual, Dr. Loren Cordain, author of many Paleo diet books. Consume what works best for your body and health.