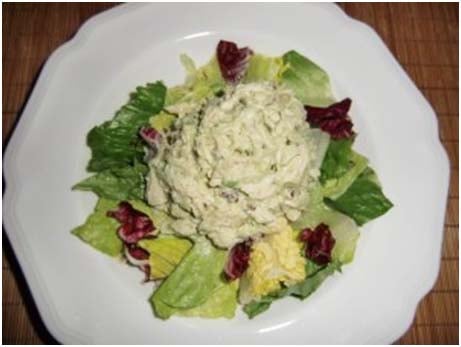 On April 18, 2011 Rudi’s Bakery launched it’s Unbelievably Good Gluten-Free Recipe Contest on Facebook.  I found out about it late evening on April 19.  I suppose after sponsoring so many contests and giveaways it was time I get in on some of the fun!  I threw something together, and I didn’t even read how the recipe would judged!  I entered my Avocado Chicken Salad recipe as a sandwich, which I often make.  My recipe was approved.  Now I need to catch up with the top recipe because I am almost 2 days behind.  I’m not too far behind, though.

Ad
[showmyads]
If you are on Facebook and you do not plan on entering your own recipe please support me with your votes at http://apps.facebook.com/rudis_recipe_contest/recipe/20 You are allowed one vote per recipe, per day, everyday through June 6, 2011.  All entry submissions and voters are eligible to win the daily prize. Prizes will vary.  Start out by “liking” Rudi’s Facebook page at http://www.facebook.com/rudisglutenfreebakery.  Then on the left side click on “Recipe Contest”; and then on “Vote” or go straight to the link above to vote for mine.  Thanks so much all! If you are interested in learning more about the contest or to enter yourself see the basics below:

If you wish to join in the competition, submit your recipe through May 20, 2011.

(ii) a photo of the entrant’s recipe; and

Once on the Recipe Contest page you will have the opportunity to read the full details.

Judges will decide who the top 3 entries are based on:

(a) the creativity in each First Round winner’s gluten free story;

(b) the taste appeal;

(c) a determination of the most creative recipe; and

Each First Round Winner’s recipe will be given a one to ten point rating for each of the judging criteria for a maximum score of forty points.

For the three chosen recipes, each entrant and one guest will be transported to Boulder, Colorado (airline tickets; two nights accommodation; a culinary tour of Boulder, Colorado, hosted by Rudi’s Bakery, which will include dinner; $500 cash; and the opportunity to compete in the Final Round.  The Second Round winners will be required to travel and stay in Boulder, Colorado from June 23, 2011 through June 26, 2011.  While there, each entrant will prepare their recipe at Restaurant 4580 (located at 4580 Broadway St., Boulder, CO 80304) for a panel of judges.  They will be evaluate based upon the criteria (a) – (d) above, which will determine the winner of the Final Round.

June 24 – Rudi’s Bakery will announce the Final Round winner.

Along with their trip to Boulder, gift card and Rudi’s swag, the Grand Prize Winner could star in a National Foundation for Celiac Awareness – Alternative Appetites cooking show with Renegade Kitchen. The show will be filmed in Boulder the weekend of the Final Recipe Cook-off. The lucky winner will prepare their recipe with Chef Dan of Renegade Kitchen for the world to see. In addition to the cooking show, the grand prize winner will be featured in a national media advertisement for Rudi’s Gluten-Free Bakery to run late summer 2011. See official rules on Facebook for complete prize details.