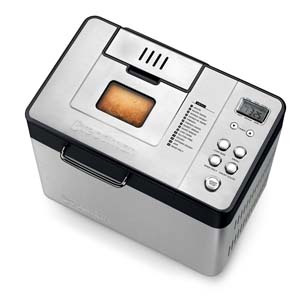 Breadman is the maker of several bread machines. Their latest models even include a gluten free setting. They were kind enough to send me a Breadman BK1050S Bread Maker to try out. Find below, my review, my experiences with this machine, tips for baking gluten free bread in a machine, and the best gluten free bread recipe for this machine I have made thus far. Then stay tuned in for a giveaway that I will post later on today that will run from June 4 through July 6, 2014 for chances to win one. Update: This giveaway has ended.

UPDATE: I have created dozens of gluten free bread recipes for this machine. Check some of them here. What Makes the BK1050S Special?

While the Breadman BK1050S has multiple settings and features, what first made me extremely excited about reviewing it was the collapsing paddle. If you’ve used a bread machine before, I am sure you found the hole that the paddle leaves in your bread annoying. While you can remove it on all bread machines after the dough mixes, it is nice to have the feature that collapses (falls down flat).

Does the Paddle Actually Collapse?

My experience with this machine was that the paddle will collapse when making batters, but not when making the gluten-free bread recipes (at least not the ones that I made). I made two recipes from their book and two two recipes of my own. I also did some experimenting. On one recipe, I tried adding the xanthan gum towards the end of the mixing cycle which allowed the paddle to collapse on its own without any assistance. However, mixing the xanthan gum at the start helps develop a more gluten-like texture in bread.

Which Gluten Free Bread Recipes Should I Use In This Machine?

I found the recipes in the cookbook that came with the machine are closer to brioche versus sandwich bread; therefore, I developed a gluten free bread recipe for this machine. I must admit, it is the best gluten free sandwich bread I have made thus far in a bread machine. The texture was better than similar recipes I have made in the oven, which says a lot because an oven usually makes the best gluten free bread. See Gluten Free Oat Bread Recipe for Breadman BK1050S.

What Are the Best Ingredients to Use in a Bread Maker?

If you take a standard gluten free bread recipe that normally would bake in an oven and try to bake it in a bread machine, it usually will turn out too moist or too gummy. If this occurs, what you want to do is reduce the ingredients that cause a gummy texture. How I adjusted my favorite bread recipe is by substituting tapioca flour with cornstarch. You can also use potato starch. Tapioca produces a chewy and gummy texture. Because this machine mixes for a long period, I used the minimum amount of xanthan gum, about 1 teaspoon per cup of flour. I also reduced the amounts of egg whites in the recipe by one. When I make this recipe in the oven, I usually use 4 egg whites (1/2 cup). In this recipe, I only used 3 egg whites. I also found that when you use rice flour, the bread also turns out gummy.

One other substitution I made was that I used sugar versus honey in the bread machine recipe. Honey makes softer bread and crust. However, since all of the other recipes I tried were too moist and chewy, I decided to use sugar instead of honey.

You should use whole grain gluten free flours that have lots of texture such as oat flour. Flaxseed meal also added additional texture.

How Much Time Does a Bread Maker Save?

When making most gluten free bread in an oven, you need to mix several dry ingredients together and set them aside. You should warm the liquid, mix it with a sweetener and a liquid. Then you need to set it aside until bubbly. In the recipes I have developed, you must beat egg whites until bubbly, add oil, vinegar, and the yeast mixture. Then you need to oil the loaf pan, spread the dough using a wet spatula, let it rise, then bake it. It can be a lengthy process.

When using a bread machine, you add the ingredients in the order they are listed and press start. Sometimes, you may need to use a rubber spatula to remove a little flour on the side of the pan or smooth out the top of the dough before baking. However, these steps are not always required. The only other step is removing the paddle after it is baked. How easy is that?

Is a Bread Machine More Economical?

I can only assume heating up this machine uses less energy than an oven, but this is not the only economical feature. During the summer if you use a household air conditioner, you will run your air conditioner more when you use an oven. Rather than heat up your kitchen with an oven, you can use a bread machine.

What Are the Other Features?

As with most bread machines, this machine has the ability to make gluten free dough for rolls or pizza which you can bake in your oven. You can also bake quick bread that turn out wonderful. To learn more, you can download the user manual at the link at the bottom of the Breadman’s page.

What Is the Material on the Outside of the Machine?

Looking at the photo, the bread machine looks beautiful and in person, it is no different. The outer shell of this Breadman is made from a beautiful brushed stainless steel and comes with a 2-year limited warranty.

What is the Difference Between a Standard Bread Machine and One with a Gluten Free Setting?

All bread machines are different. Some have different pan sizes. Others vary in mixing times, but two things standard bread machines have in common is that they knead most bread dough twice and rise twice. With most gluten free settings, there is only mixing cycle and one rise.

If you are intolerant to gluten, do not use an older bread machine that you have used to bake gluten bread. The crevices will contain gluten and may make you ill. Purchase a new machine and dedicate its use only for gluten free bread.

Disclaimer: Though Breadman sent me a free bread maker and will be supplying one winner of the giveaway with a free machine, this in no way swayed this review. This model even makes jam!