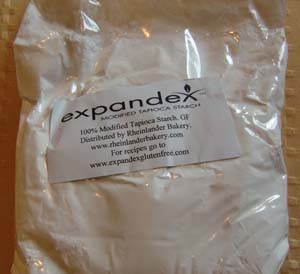 Expandex®, a gluten-free modified* tapioca starch made by Corn Products (though not a corn based product) is promoted as enabling gluten-free bakers to create a gluten-like baked good, similar to using gluten flours. It is promoted as improving the rise, taste, texture, appearance and extends shelf life. In addition, Expandex creates a more moist and better crumb texture to baked goods and improves the crispy texture of deep-fried goods, along with bringing out more of the flavors of other ingredients. Learn where to purchase it, how to use it and more.

UPDATE: I have tried Expandex. In most cases it improves the baked product; however, in gluten free bread recipes, I have been able to achieve the same texture without the use of Expandex. When used in dough, it creates the perfect elastic dough.

My main question is how is it processed? Modified food starches are processed either by the use of enzymes or chemicals. Since Expandex is a proprietary product, meaning they keep it a secret so that others do not duplicate their idea, we do not have the answer to this question.

UPDATE: The former Expandex website had linked to the various processes allowed for manufacturing modified starches by the FDA. Check it out if you are curious about the chemicals allowed to process it. They also stated that it was non-GMO. What I take from this, is that though it is non-GMO, it may contain all sorts of chemicals, as many other modified starches.

Corn Products International stated that Expandex is corn-free, made in a separate facility in order to prevent cross-contamination from allergens such as corn, etc. It is also free from artificial colors, flavors, and preservatives, non-GMO, and does not contain aspartame.

Update: That brand of Expandex is no longer sold.

What we do not know for certain is if it is chemical free or not.

If you are already eating many pre-prepared gluten-free foods you are probably already consuming modified food starches. My plan is to use it only for special occasions mainly when I cannot achieve close to desired results in a gluten free baked good. If you bake with most Nestle’s chocolate morsels you are already getting chemicals. UPDATE: Nestle’s now has natural dark chocolate morsels.

This is definitely an improvement on corn-based modified food starch, as corn is something I am trying to eliminate from my diet, or at least consume in moderation. Corn is often GMO (genetically modified organism), also known as GE (genetically engineered). However, you can purchase non-GMO cornstarch such as Bob’s Red Mill brand.

If you are interested in trying Expandex yourself check out Expandex for yourself Carol Fenster’s Expandex Baking Tips and learn how much to use in your recipes.

You will now find Expandex that is tested to be under 5 parts per million (ppm) gluten and is manufactured and packaged in a gluten free facility on Amazon. It is available in 15 oz. and 2.5 lb. packages.

*Modified tapioca starch is not the same as tapioca starch, tapioca flour, or tapioca powder.  One would have to modify it, as described above.