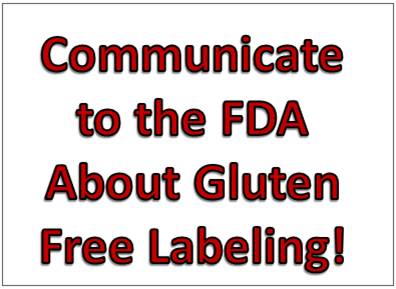 What exciting news! Our voices have been heard loud and clear. The FDA has not only reopen the docket on gluten-free labeling, but has opened up the communication line, as well. Those with celiac disease, gluten intolerance or gluten sensitivity, along with manufacturers and more, may add their 2 cents in, so that the FDA has literally heard all of our voices. Learn where to communicate your opinions on gluten-free labeling and how this all came about. The launch in the fight to establish unified gluten-free labeling laws began last May, when Jules Shepard and John Forberger organized the Gluten Free Labeling Summit held in Washington D.C., just in time for National Celiac Disease Awareness Month. The purpose of the summit was to grab the attention of the FDA and Congress, so that they realized they had left us all waiting way too long, and that those on a gluten-free diet for medical reasons deserve an answer now!

Ad
[showmyads]
This summit took an enormous group effort. Not only did some donate to the cause, but some assisted in building the world’s largest gluten-free cake. The cake was made at Whole Foods Bakehouse, took 180 half sheets to create, weighted one-ton, and was 15 feet high. This great cake was a symbol of the great need for the FDA’s immediate action to determine the safest labeling laws for those in medical need. It’s just been too darn long!

In 2004, the FDA was given the task to come up with a proposal for gluten-free labeling within 2 years. They took a little longer than that, and in 2007 proposed a less than 20ppm (parts per million) gluten allowed in products labeled gluten-free. Well, it never went any further than that.

Recently, Senators Ron Leahy (D-VT) and Ron Wyden (D-OR), wrote a letter to the FDA demanding an answer to as why this issue has not progressed. They were not only concerned for the issue to come to rest, but were also concerned that there were now a number of organizations which have taken the matter into their own hands, gluten-free certification.

There are a number of organization that will certify a product as gluten-free, for a fee. Some include Celiac Sprue Association, testing for under 5 ppm; Gluten-Free Certification Organization (GFCO) sponsored by GIG (Gluten Intolerance of North America), testing for under 10 ppm; and the newest, The National Foundation for Celiac Awareness (NFCA), along with Quality Assurance International (QAI), also for under 10 ppm.

In answer to all of our questions and demands, the FDA announced today that they are reopening the ability for us to comment on the subject of gluten-free labeling. Those invited to add comments or suggestions are those who have celiac disease, consumers in general, members of the food industry, state governments, local governments, and anyone else who has an interest in this matter.

The FDA’s News Release does not have thorough instructions on how to add comments online, but I have provided detailed instructions below. Note, that your comment will be published online, but names are not requested, unless you wish to add an organization, person or government agency which you represent.

DATE: Submit your electronic or written comments by October 3, 2011.

You may also communicate your opinions on on this subject via mail to the address below.  Just remember to include Docket No. FDA-2005-N-0404 on each page of letter.

You may also be interested in reading the FDA’s “http://www.fda.gov/NewsEvents/Newsroom/PressAnnouncements/ucm265838.htm“. There you will learn how the FDA proposes to define gluten-free and more.

Special appreciation goes to all who supported the Gluten Free Summit. You can view a list of all participants, sponsors, etc. at A Glimpse at ‘Gluten-Free Food Labeling. And appreciation also goes to Senators Ron Leahy and Ron Wyden.