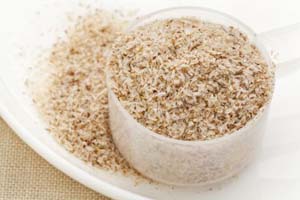 Psyllium husk, powder and whole seeds, are gluten free. Due to the sudden popularity of its use as a replacement for xanthan and guar gums, I wanted to ensure that those with gluten intolerance are using products which are truly gluten free. (By the way, you can use some psyllium husk along with flax and chia seeds.) I had purchased some of Now Foods’ Psyllium Husk Powder about a year ago to experiment with the ingredients in Rudi’s gluten free bread. The use of psyllium husk is to prevent digestive blockage that some experience with gums. The whole psyllium husk seeds work better than the powder. It all depends upon what you want your final product to look like.

Meanwhile, my main concern was that if I were to use psyllium husk in a recipe I wouldn’t want to promote something that was not safe for those with gluten intolerance. So, I recently contacted NOW Foods asking,

“I am wondering if your psyllium husk powder is gluten free. If so, do you test for gluten cross contamination? If not, is your facility gluten free? Or are the manufacturing lines gluten free?”

“We are not a certified gluten free facility. We have tested our cleansing method’s effect on the gluten contamination risk and found no real issues. We do not test for gluten on an regular basis.

To clarify their response for those of you unfamiliar with the terms above, it appears that they have tested their manufacturing lines (equipment) for gluten after cleaning it well. It does concern me, however, that they used the words “no real issues”. Perhaps it showed some gluten, but not over the 20 ppm, which is the allowable amount. They do manufacturer products that contains gluten, thus the purpose for cleaning the equipment.

I know of one person who uses whole psyllium husk (not the powder form) for bread baking and swears by it promoting regularity as she was having a problems with the gums. She uses Yerba Prima whole husk phyllium, and she has celiac disease (gluten intolerant, to say the least). She uses up to 3 tablespoons, or as needed, mixed with hot water, allows it to rest for 2 – 3 hours and it forms a thick gel. She adds this mixture to her bread dough, just as you would use flaxseed gel (hot water and ground flaxseed). I just emailed Yerba Prima to find out how their brand is manufactured and will update you here. [I never received a reply.] It can be purchased through Vitacost or via my Amazon store, Carla’s Gluten Free Store. By the way, on the label it reads “Colon Cleanser”. Not great sounding, but if it works, does not change the flavor of your bread at all, and you have no digestive issues, then it’s a good thing to use.

One gum I’ve been wanting to experiment with, and have also had in my pantry for several months, is gum arabic. It is very easy to digest. I’m off to make my hubby some of his favorite gluten free oat bread and try it now.

UPDATE: Gum arabic did not help the dough adhere at all. I used one tablespoon and then had to another one tablespoon of xanthan gum. The bread turned out a bit softer than usual, though, which was great.

UPDATE: Rather than add additional water to psyllium husk, I see many recipes now online that use psyllium husk in an equal ratio to water, as a substitute for xanthan and guar gum. I haven’t tried it yet, but I love that psyllium husk powder made my bread recipe softer. Keep that in mind when using it.

Check out all of the Gluten Free Bread Recipes!