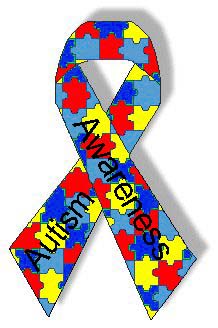 April is autism awareness month!  According to The Autism Institute, dietary change is the pivotal action in defeating autism. There are a few autism diets.  It is suggested that someone diagnosed with autism may improve when on a gluten-free and casein-free diet (GFCF), or even on the Feingold Diet, also known as the ADHD Diet.

Gluten is defined as a protein found in wheat, rye, barley and many individuals have problems with oats, that are not labeled gluten-free.  See the “Celiac: Foods to Avoid” list and the Gluten-free Diet Safe Food list.

Autism, also known as Spectrum Disorder (ASD), usually shows up in childhood, prior to the age of 3 years old.  It is characterized by the symptoms of slow social development skills, lack of ordinary communication skills and repetitive behaviors.

“According to one theory, some people with autism spectrum disorders cannot properly digest gluten and casein, which form peptides, or substances that act like opiates in their bodies. The peptides then alter the person’s behavior, perceptions, and responses to his environment. Some scientists now believe that peptides trigger an unusual immune system response in certain people. Research in the U.S. and Europe has found peptides in the urine of a significant number of children with autism. A doctor can order a urinary peptide test to see if proteins are being digested properly.

“Medical tests can determine if your child has a sensitivity or allergy to gluten, casein, soy and other foods. Any pediatrician, or a physician from the Autism Research Institute list, can order these tests before you begin the diet.”

Autism-help.org reports that some individuals, or the parents of children with ADHD, claim that the Feingold Diet is an effective way to manage autism, ADHD and Asperger’s snydrome.

The Feingold Diet is a diet which avoids artificial ingredients such as chemicals in artificial coloring, flavoring and preservatives.  To find out more read their FAQs.

Read many success stories from parents of children with autism, Asperger’s Syndrome or ADHD who placed their child on a GFCF Diet.

Meanwhile, try a GFCF recipe by visiting the list of gluten-free casein-free recipes.

If you have had any success with a GFCF Diet please add your success story below so that others will know there is hope.