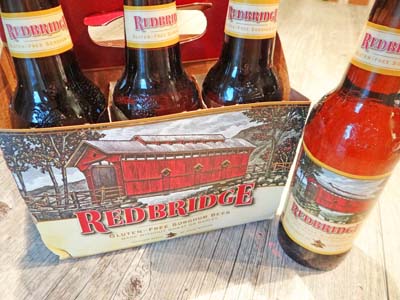 On a gluten-free diet? This gluten free beer list should come in haindy for you. Beer is normally brewed with barley, something which celiacs and those with gluten-intolerance cannot consume. However, there are gluten-free beers on the market that actually tastes very similar to regular beer. Some are malted and others are not. Brewers can use either rice, sorghum, buckwheat or corn instead of barley. Sorghum and buckwheat are the most used. What you should be aware oHambleton f is that some manufacturers use barley. They state that the barley disappears during brewing, and when tested for gluten it measures up to the other gluten-free beers. Below you will find my gluten free beer list with descriptions. If you cannot find any of these brands in your area, check out the homemade gluten free brew kits. Mugs up! – chilled of course!

UPDATE: The TTB does not allow any alcohol manufacture, of beer or otherwise, to label a product gluten free if it is derived or contains a gluten ingredient. This means that Omission Beer (See Update Below) and Estrella Damm Daura are no longer able to make a gluten free claim on their products. In addition, I have read many reports of those with celiac disease to have a “slight” or “short-lived” reaction to Estrella Damm Daura.

UPDATE Nov. 21, 2013: The Celiac Sprue Association (CSA) now certifies Omission Beer to be under 5 parts per million (ppm) gluten. Some experts in the gluten-free community are still unsure of the accuracy of its testing. The FDA and TTB are still working on gluten-free labeling rules for fermented products.

UPDATE Feb. 2014; TTB announced that it would allow use of the statement
“[Processed or Treated or Crafted] to remove gluten,” along with one of the following statements: 1) the product was fermented or distilled from a
grain that contains gluten; 2) the gluten content of the product cannot be verified; or
3) the product may contain gluten.

You can purchase gluten free beer at Internet Wines or BevMo, however, local grocery stores now are beginning to carry them. I found Redbridge at our local Raley’s grocery store. 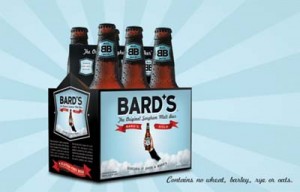 Founded by celiacs, Bard’s gluten-free beer is the one I hear about the most. I have seen it top a survey as the best in taste. You can read the rave reviews on many gluten-free blogs and forums, probably because it is America’s first gluten-free beer. It is malt brewed with 100% malted sorghum. In a response to my inquiry, Bard’s states that their beer tests at 5 parts per million (ppm) gluten. 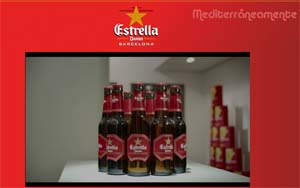 Damm Daura is imported into the U.S. from Barcelona, has been awarded, for the second time, the “world’s best gluten-free beer”. It is known for retaining the same taste and as regular beer, its creamy hops-flavored froth, and tests at less than 6 ppm (parts per million) gluten. The FDA’s proposed allowance is 20 ppm. However, it is made from barley and then later extracted. The testing for gluten in beer is unreliable as beer breaks down the gluten. For those who are not gluten intolerant, you will be able to enjoy this beer. Estrella’s motto is “The Beer of Barcelona.” In Chicago Tribune’s gluten-free beer taste taste, done by non-gluten-free dieters, it was stated that Estrella’s gluten-free beer “tastes like a can of beer.”

Note: Estrella makes two beers, one with gluten and the other gluten free. Be sure to purchase the one that includes “Daura” in its title. Plain “Estrella Damm” contains gluten.

Other beers tested were in the taste test were:

Ámbar: Ámbar is the first dark lager beer produced in the Dominican Republic. It is made from feature-defining low temperature active yeast and spicy malt. It is brewed with barley malt, but tests below 6 ppm.

Schnitzer Brau Gluten-Free Beer: Two flavors – Original and a citrus and lemon blend. Organic without chemicals, pesticides or insecticides. The company states that their gluten-free beer is lower in gluten than those found in the U.S. Brewed from raw materials derived from certified organic cultivation.

St. Peter’s G-Free™ Beer: Brewed with sorghum. In a separate taste test in the UK, of 16 gluten-free beers, by gluten-free and regular beer drinkers, it was praised for it’s excellent flavour and drinkability from across the range of tasters.

New Grist: brewed with sorghum and rice. Made by Lakefront Brewery and is currently only available in Milwaukee. In the Chicago Tribune’s taste test it was stated, “tastes like a summer beer, with its litchi [fruit] aroma, champagne color and tropical, citrusy taste.”

Redbridge – Anheuser-Busch (the makers of Budweiser) is a full-bodied lager, brewed from sorghum. It has a fruity aroma, a toasted sorghum flavor, and My husband is not gluten free and a moderately hopped flavor. Note that if you have other intolerances, it also is made with yeast, hops and corn. (Hops is gluten free.) However, Redbridge is not brewed with any gluten. My husband enjoys this beer. He said, “They did an excellent job with it, for a lager made without gluten.” He usually enjoys Bud, Bud Light and Corona.

Other gluten-free beers include:

New Planet Beer Company makes 3 gluten free beers: Treadlightly Ale, 3R Raspberry Ale, and Offgridpale Ale. The founder has celiac disease, and had a master brewer friend of his create gluten free beer that he’d enjoy. They went through many different beer until he discovered one he liked. A matter of fact when it debuted at his 40th birthday party it received rave reviews, even by those without a gluten intolerance. Together they launched New Planet Beer with Tread Lightly Ale. Each batch of their gluten free beer is tested for gluten, under 20 ppm (parts per million). It is made from sorghum and gluten free yeast.

Omission beer is made from barley, water, and yeast. They have a proprietary process that removes gluten. It is tested using the R5 Competitive ELISA test for gluten for less than 3 ppm. As stated on their site, “Omission Beer may contain gluten.” This testing method is known to be unreliable on gluten free beer. When beer is fermented it breaks down gluten, possibly to undetectable levels. Visit their site and click on the “Test Results” for more details. Meanwhile, you’ll find rave reviews on the taste of this beer below in the comments section.

Woodchuck Hard Cider – Woodchuck is made from apples rather than grains. All their varieties are gluten free, and always have been. See all of their Gluten Free Hard Cider choices.

Ambar Green – Made in the U.K., Ambar Green has a slight honey taste and is low in calories. Known as a Spanish beer it consists of water, barley malt, antioxidant E-300, stabilizer E405, fiber and natural flavors. The barley malt has been treated it leaves less than 6 ppm (parts per million) gluten. The FDA standards are 20 ppm.

My husband brought home what he thought was Corona for a guest we were having over. I noticed the bottles were a 7 oz. size. He had no idea what he had purchased. It was the only Corona beer available at the store he visited. It has a Corona bottle cap and the label reads, “Cornita Extra”. He mentioned it was gluten free beer. With a little more research, I discovered on celiac.com that someone from Canada had tested it along with several other gluten free beers and it turned out to be one of two that tested negative for gluten. Mind you it was a few years ago and it was a product of Canada, not the U.S. or Mexico. You should check out Coronita Extra (7 oz. bottles) and Corona Extra (12 oz. bottles). Also check out the test results of one blogger using EZ Gluten Testing Strips. If you find out any further information, please share it in a comment below. One person wrote a review on Corona Extra after hearing from a Celiac friend that it was tolerable with gluten intolerance, more so than many beers labeled gluten free. According to Sinebrychoff, a company owned by the Carlsberg Group, Corona Extra contains: water, barley malt, rice and/or corn, hops, yeast, antioxidant (ascorbic acid), stabilizer (propylene glycol alginate). They describe Cornoa Extra as a light lager.

Glutenberg Gluten Free Beer (LINK NO LONGER AVAILABLE) containS 0 ppm gluten. (There isn’t a recognized test for 0 ppm gluten in the U.S., but there is one for 3 ppm.)

Blended with sorghum, demerara sugar and pear juice, and then balanced with traditional pale ale hoping.

Sold in individual 473mL cans for $2.95; and manufactured in Canada and distributed in the United States.

A blend of light-bodied millet, brown rice, sweet potatoes and molasses along with plenty of American hops.

Dark Ale – extra dark chestnuts lend a roasty flavor and aroma with notes of chocolate and dark fruits. The hops take a supporting role in this beer allowing the roastiness to come forward in the palette.

IPA No. 3 – citrusy characteristics with the addition of tropical and stone fruit aromas from the heavy use of Santiam hops.

IPA No. 2 – ntense hoppy bitterness and a strong hop aroma loaded with grapefruit, pineapple, and lemongrass.

When a reader in a comment below mentioned Angry Orchard, I contacted them to see how safe their product was for those who are intolerant to gluten. See below for their reply,

“Our ciders are made with all naturally gluten-free ingredients. We make every effort to avoid cross-contamination of ingredients, and periodically test our cider and cider making equipment.”

Strawman which is a combination of apples with accents of oak,

Iceman which is a combination of apples with accents of caramel and toffee, and

The Muse which is a bubbly concoction of apples with accents of French oak.

Their website is a delight to visit. It is so unique!

Trader Joe’s carries GFB which is brewed by Minhas Craft Brewery; and is a vegetable/fruit beer. Fruit/vegetable beer is a flavored beer which some breweries use fruit or vegetables. Others use syrup or extracts. While others use processed flavorings. They are usually ales, but do not possess many of ale characteristics. Malt flavor is usualy added; however, very little hops are used. (Hops are gluten free.) The reviews for Trader Joe’s GFB varies widely. You can read them here and here.

I contacted Minhas Craft Brewery to learn more about their beer. Here’s what they had to say,

“It is definitely the best tasting Gluten Free beer on the planet.  We have been making it for a while, and continue to improved with every batch.  The first batch we made a couple of years had a lit cider like taste which many liked but some did not.  We have since improved the recipe and that cider taste is no longer there.  All the consumers love it now.  In fact, you do not have to be drinking for Gluten Free taste or content – many buy it for its wonderful taste.”

Still only available in Canada, Boxer Gluten Free Beer will soon be available in the United States. Boxer is a lager. as is GFB. Since it is made It is moderate on hopps, is made from sorghum with a light citrus flavor. Boxer is also made by Minhas Craft Brewery.