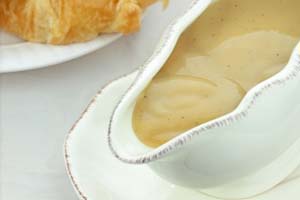 The most asked question from new gluten free dieters I receive is how to make gluten free gravy. Over the years, I have experimented with several different methods. I have tried several different gluten free all-purpose flours and starches, even using several mixes of my own. They all resulted in thinning once refrigerated, frozen, or reheated. I even tried a technique that was in a scientific gluten free book made for professional and scientific recipe developers. I was hopeful, however, it did not work either. After some recent experimentation I tried something new. It turned out well. I froze it and just defrosted it the other day. It worked! It was still thick upon reheating. Yes! Sweet success!

Ad
[showmyads]
One may thicken gravy naturally by pureeing sauteed onion, garlic, celery, etc. that has simmered in a broth, but if you’re seeking something fast, such as a flour, keep on reading. It is not corn-free, but is used in small amounts.

I discovered if you mix xanthan gum with enough coking oil and pour it into your broth it will not only thicken it, but it will stay thick even upon refrigeration, freezing, and reheating. It does not make the gravy white, however, therefore, you may wish to use a mixture of xanthan gum and flour. However, xanthan gum alone, along with the oil, does the trick.

I tried using guar gum, but it did not stay thick upon reheating after freezing. Perhaps I didn’t use enough, but if I would have used more my gravy would have turned to rubber.

Mix 1 teaspoon of xanthan gum with enough oil to create a pouring texture. Do not allow it to sit. Pour into a boiling broth immediately; stir until thickened. Of course you’ll need to increase or decrease the amount depending upon your amount of broth. I used in a pot of beef stew meat, therefore, I couldn’t tell how much actual broth was present. The amount required will also depend upon what other vegetables are present in the broth, such as onion, etc.

I hope this helps those who have been having trouble in this area.