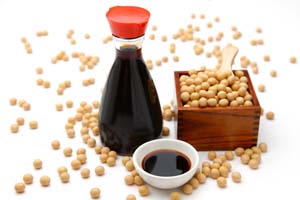 If you are on a gluten-free diet, note that usually soy sauce that is not labeled gluten-free contains wheat. In some countries outside the United States, it may contain barley. While there are gluten-free brands of soy sauce on the market, including tamari sauce, you should know what to expect if you accidentally ingest some glutenous soy sauce. There are two different methods of making soy sauce. The one used in making the most flavorful soy sauce is fermentation. The other process is chemical hydrolysis, where 3-MCPD occurs, which is a known carcinogenic (cancer-causing agent). Once processed, molasses or caramel color is added to make it darker in color.

In a soy sauce study, 22 brands of gluten-containing soy sauce were tested for gluten content from grocery stores and Asian markets using the R5 sandwich assay test or the R5 competitive ELISA test. All of the soy sauces tested with the R5 sandwich assay proved to be negative for gluten content. The ones tested using the R5 competitive ELISA test showed that 21 contained less than 20 parts per million (ppm) gluten and the other contained 22.8 ppm.

The United States limit of gluten in a gluten-free product may contain less than 20 ppm. If you do accidentally consume soy sauce, realize that if little is used in the recipe, it is most likely that you will not have a gluten reaction from the soy sauce, unless you are extremely sensitive to gluten. Also, if a small amount is used in what you consume, that amount compared to the volume of the food item brings the ppm down even further.

I am not suggesting to anyone that is gluten intolerant or on a gluten free diet to start consuming gluten-containing soy sauce. Just note that if you should accidentally ingest some, and you may have a reaction to it. The reaction could be due to you being hyper-sensitive to gluten, from the chemical hydrolysis process, or the testing of soy sauce is inaccurate. Some people are even sensitive to fermented products in general.

16 Replies to “How Harmful is Soy Sauce on a Gluten Free Diet?”