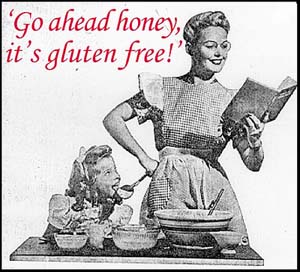 There are only a handful of gluten-free magazines available, namely, Living Without, Delight Gluten Free Magazine, Gluten-Free Living and some online. The newly launched, The Gluten Free Consumer magazine, brings something new to the table. It is touted as a 16 page magazine full of reviews and $75 worth of coupons that will save us time and money. But is the question is, out of all the gluten-free magazines that exist, is this one you can trust? I haven’t read this magazine, but can definitely provide you with some important information about the company.

Ad
[showmyads]
UPDATE: As of December 2012, The Gluten Free Consumer is no longer available. They went from paid subscriptions to free, and now have removed their website from the Internet.

Many people new to the gluten-free diet have trouble finding gluten-free food that they enjoy, especially in the beginning. They tend to waste money trying to find just the right products. There is plenty of reviews online, but not everyone has the time to hunt around and find just what they need. And trying different foods can be costly. Gluten-free magazines may be just what you need. But is it this one?

I remember when I tried baking my own bread the first time, second, third, etc. I wasted a lot of expensive flour. Then when I went to purchase some at Trader Joe’s it weighed more than the ones I had baked at home. Thank goodness those days are over! We all need guidance when we first begin the gluten-free diet. And Gluten Free Magazine states they can help you. But can they?

The Gluten Free Consumer Magazine states that they are a family run business. The owners and founders of Allergy Menu Specialists. Their staff consists of Chaton, President and Owner, who was diagnosed celiac 6 years ago; Rodney, CEO and team motivator; Celeste, graphics designer, who is gluten- and dairy intolerant and has an autistic child with multiple food allergies; and Michelle, their bookkeeper and provides feedback on products.

They state that they actually test products themselves, (not just write about products that they have heard about). Not only does their magazine supposed to help us save time on hunting down the right products with its gluten-free product reviews, but it saves us money, by preventing waste and with $75 worth of coupons! They went to press in Salt Lake City on Wednesday, August 27, 2011.

I just had to blog about this new gluten-free magazine! And if you’re familiar with me, you know I just had to add a photo. I noticed that they had a photo of ‘Go ahead honey, it’s gluten free”. I had seen this photo on a gluten-free blog somewhere, a number of times. I just assumed they were associated with the magazine. With my intellectual property (patents, trademarks and copyrights) background, I called them to find out if I could have permission to use the photo. I asked them if they were associated with the blog that hosts ‘Go ahead honey, it’s gluten free”, and the gentleman said, “No.”. I asked him if he owned the photo that was on their site. He said, “Yes.” So, I tried to clarify, once more, whether they were familiar with the blog that promotes this gluten-free foodie event, and he again replied, “No.” I said, “Then you don’t own the photo.” He hung up. I thought it was odd that they did not have a photo of the front cover of their magazine on their website. Who knows what they will actually provide.

With the above stated, be careful around the web when you’re hunting and pecking for gluten-free products, deals and such. Purchase products from reputable companies. Anyone can slap a gluten-free label on anything. To save time and money, read and enter our Gluten-free Giveaways and Reviews. Meanwhile, I have contacted the blog author who actually added “Go ahead, honey it’s gluten free” to the original photo, which she had permission to use. The Gluten Free Consumer has since removed the photo. I continue to notify article submission sites to remove it as well.  Got to love intellectual property rights!