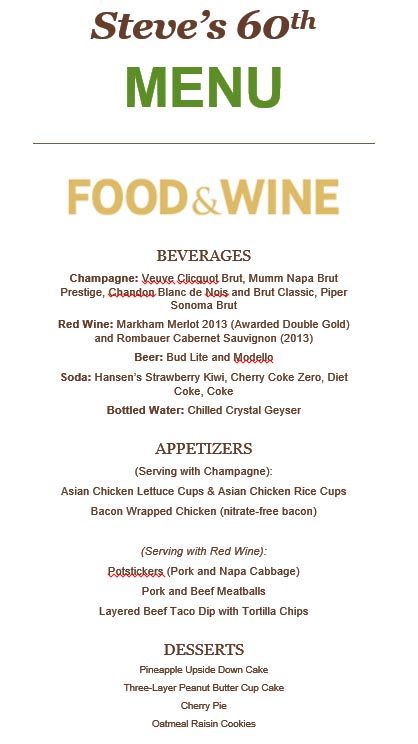 I recently hosted a birthday party for my husband for less than 20 guests. At first, I thought about holding it at a nearby winery. Then I thought, why not use that money to take him on a surprise vacation for his actual birthday. So, over a three week period, I slowly made appetizers and desserts. I began the menu by visiting my Gluten Free Appetizers category in search for my husband’s favorites. (There, you’ll discover over 90 different recipes.) I decided on five appetizers (I’d prefer to overdue it then not have enough) and two Gluten Free Dessert Recipes (over 450 available.) Learn how I made most of them far in advance. Hopefully, this schedule will help you host your next party. People will rave about the entire menu and will never know any of it is gluten-free. 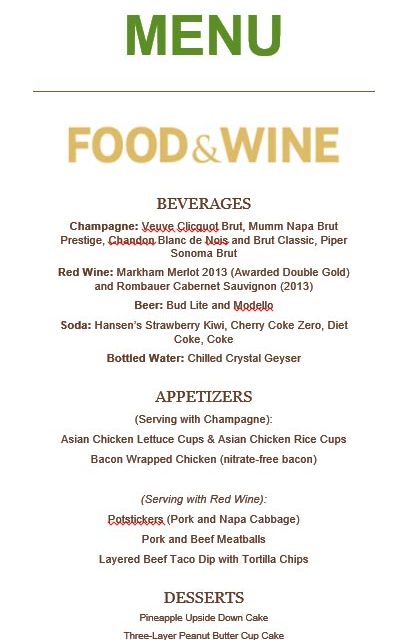 I asked my husband if he wanted his usual cake or something different. I reminded him how much he enjoyed the 6-inch Gluten-Free Peanut Butter Cake. He chose his usual, Gluten Free Pineapple Upside Down Cake. I had improved the recipe since the last time I made it for him. It turned out amazing with a little more butter! I made an extra cake, Three-Layer Gluten-Free Peanut Butter Cake as the one layer pineapple cake would not be enough for our guests. My sister-in-law is allergic to rice but is okay with gluten. So, I when my daughter asked what she could bring to help, I told her two more of her Dad’s favorites, cherry pie or oatmeal raisin cookies, containing gluten. He’s not 100% gluten-free because he doesn’t react to it and my sister-in-law could eat them. She brought both!

About three weeks before the party, I made the pineapple upside down cake, froze it uncovered on a plate. The following day, I covered it with plastic wrap and then foil and froze it again.

About two weeks before the party, I made the peanut butter cake. You can make the cake itself one day, if desired, wrap them in plastic wrap and do the rest another day. I made the entire cake in one day. The peanut butter frosting is to-die-for! Instead of tons of butter, it contains some butter and tons of whipping cream. Once assembled, place it in a plastic cake carrier and freeze.

Any day before the party, make the Melted Chocolate Recipe for Writing on the Cake. You can decorate a frozen cake and refreeze if desired.

One week before the party, prepare the beef taco filling for the Layered Taco Dip and freeze it. I made three times the recipe and only used half. I’ll used leftovers toastadas.

One week prior to the party, make the Gluten Free Potstickers. They freeze well. I made a full recipe, 97 small potstickers, using a 2-1/2-inch round biscuit cutter. You can make them up to 6 weeks in advance. Freeze them in a single layer and then freeze in zipper storage bags. I only cooked half for the party and saved the other half for my hubby. A matter of fact, the few leftovers that I had cooked for the party were requested for breakfast along with the meatballs by one overnight guest. I ran out of dough and had enough filling for fuve ti sux more. Knowing that one of my sister-in-laws is allergic to rice, I fried them up into balls and also froze them. Then the day of the party, I fried them when I fried the potstickers (separately, of course).

Five days before the party, if using, make the sauce for the meatballs. It’s extremely easy!

Four days before the party, make the dipping sauce for the potsticker which consists only three items. Serve the hot chili oil separately. Not everyone will use chili sauce, and some will not use the dipping sauce.

Two days before the party, defrost the chicken breasts for the bacon-wrapped chicken.

The day before the party:

The Day of the Party

The party invitation read from 1 – 4 pm. Be sure to be prepared for early guests. I had one arrive at 11:30 pm. He was family, and I had forgotten that I had invited him to come whenever his flight arrived. Who remembers what you say in the early stages of party planning? That must have been six months before the invitations going out. Ha-ha! Luckily, I was ready! However, it threw me off, and I forgot to place the cushions on the outside chairs as well as a few other minor things. Oh well! Something usually goes wrong at a party, and I’m just glad it was just that!

Begin with the chicken Asian wraps. They’re lighter than many other appetizers. All you have to do is chop up some lettuce for the rice cups and fill them both with the filling that you already made. Keep in mind, if using rice cups, not just lettuce, they become soggy quickly. So, be sure to line them with shredded iceberg lettuce and only stuff a dinner plate at a time before serving. The lettuce cups/wraps also get a little soggy. Fresh is best. I like to pass these around along with small paper plates and napkins.

Move onto the Bacon Wrapped Chicken Bites. All you have to do is coat the chicken pieces in the sauce, slice the bacon into thirds, wrap the bacon around the chicken, and keep closed by inserting a toothpick. Then baked for 30 minutes on a broiling pan. They usually go quickly! So, make plenty.

Next, preheat the oven to 350ºF to reheat the meatballs.

Defrost a batch of the potstickers on “Reheat Fish” in the microwave. That’s a low temperature. Once defrosted, fry them for 1-1/2 minutes. Then add a splash of chicken broth and steam, covered for 3 minutes.

(At this point, my guests were pretty full (I had also served chips and homemade onion dip); and I was running out of time. A couple of guests were making a birthday presentation. So, I announced that anyone who wanted to stay for dinner, that I was serving the layered taco dip at 7:30 pm. )

After the presentation, I served the desserts. My sister-in-law who is allergic to rice is the only one who had any cherry pie. There may have been two cookies or so missing. So, they all went for the gluten-free cakes; and there wasn’t a gluten-free eater among them.

It turned out perfectly. I used half of the three pounds of taco beef I had made and served it with both multi-grain tortilla chips (Food Should Taste Good brand) and plain. There were seven of us.

Right before dinner, make the taco dip for the guacamole and shred the lettuce. Be sure to add enough lime juice or vinegar to the guacamole to prevent it from browning. Refrigerate until needed. I added 1-1/2 pounds of taco meat to a casserole dish, topped with shredded cheddar. I microwaved it until it melted. Then I topped it with shredded lettuce. Not everyone can agree upon guacamole, sour cream, or salsa; therefore, if serving as a sit-down meal, allow each person to add their own. Otherwise, spoon out stripes of each on top of the lettuce. Serve with tortilla chips.