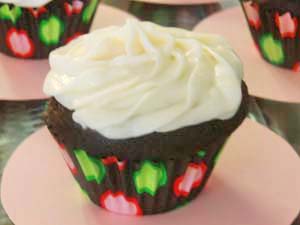 As many of your know, May is National Celiac Awareness month (and gluten-free awareness) . I was asked to contribute a gluten free cupcake recipe for the Cupcakes for a Cause event sponsored by the ACDA (American Celiac Disease Alliance). The number of cupcakes I needed to represent the number of years that I have been gluten free. Well, that seems simple enough, but because I fell off the wagon, so to speak, it hasn’t been quite 7 years, but that’s what I went with because that’s what I celebrate, the moment I found truth, gluten isn’t good. You’ll see my 7 cupcakes and a number of photos below. You may vote for which gluten free cupcake recipes you like on the Pinterest’s ACDA Cupcakes for a Cause page. Just like it or repin. Either counts as a vote. [Contest is now over.]

This cupcake recipe was adapted from Brown Eyed Baker’s Dark Chocolate Cupcakes recipe, which was adapted from Cook’s Illustrated into a gluten free version. It tastes like the real thing when you use my superfine rice flour blend recipe. The other changes I made, besides using a different frosting, are the use of gluten free non-fat Greek yogurt instead of whole sour cream, gluten free natural dark chocolate morsels instead of chopped bittersweet chocolate, substituted fine sea salt and evaporated cane juice instead of regular salt and sugar, (though you can use any type you desire), and added hot water.

Because I substituted non-fat Greek yogurt for whole sour cream, it is important to beat just long enough to blend the batter when adding the flour. The lack of the additional fat can make the batter tough if over-mixed. Though an entire stick of butter should be sufficient. * Dutch processed cocoa is higher in cocoa butter than regular cocoa powder. If not using Dutch chocolate, add an additional tablespoon of butter.

** I use FAGE brand Greek yogurt, as it is thick and gluten-free.