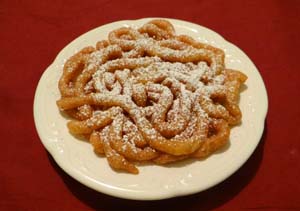 One of my Facebook friends asked me if I had a gluten free funnel cake recipe. I didn’t, but it intrigued me, as I had never made one, or tasted one before. I headed on over to one of my favorite chef’s, Alton Brown, to see how he made them. You can watch his Funnel Cake video. Either click on the photo with the arrow or the Video tab above the recipe. Funnel cakes are usually served at fairs, carnivals and street vendors. If you’re missing them now that you’re gluten free, try making this recipe at home. I must say, they are very addicting!

Because a high protein flour is needed so that the liquid is absorbed by the flour, I used sorghum flour. It contains double the amount of protein compared to rice flour. I was tempted to use rice flour, as it creates a good crust when fried, but knowing that the high egg amount would brown nicely, I used the sorghum.

I chose Alton’s funnel cake recipe to convert to gluten free because he uses water instead of milk or cream, making it a dairy-free delight when using a dairy-free buttery spread, though I used unsalted butter. If you like a more cake-like texture I suggest using milk. I hope you enjoy these gluten free funnel cakes as much as I did. They’re so fun to make!

A gluten free funnel cake recipe just like the ones you'd find at a fair - made from a lightly sweetened batter, ready for your sweet toppings!

For the Funnel Cake:
Suggested Toppings:

* You want to push the batter out hard enough for the streams to be thick. Thin strings of batter results in crispy cakes, nothing like cake at all. Also, be careful not to over-fry them.

When making funnel cakes freehand, often some of the batter or a large section of a cake will float away in the oil. You can add more batter to combine them, or flip a piece on top of the other, as long as you do so immediately. You can also use a mold especially made for deep-frying funnel cakes which can be used in skillets.

The batter will sink to the bottom of the pan/fryer at first. Don't worry, as it will float to the top in a few seconds. Just continue making your swirling motion no matter where it is. Don't stop the flow of the batter on top of the batter in the oil.