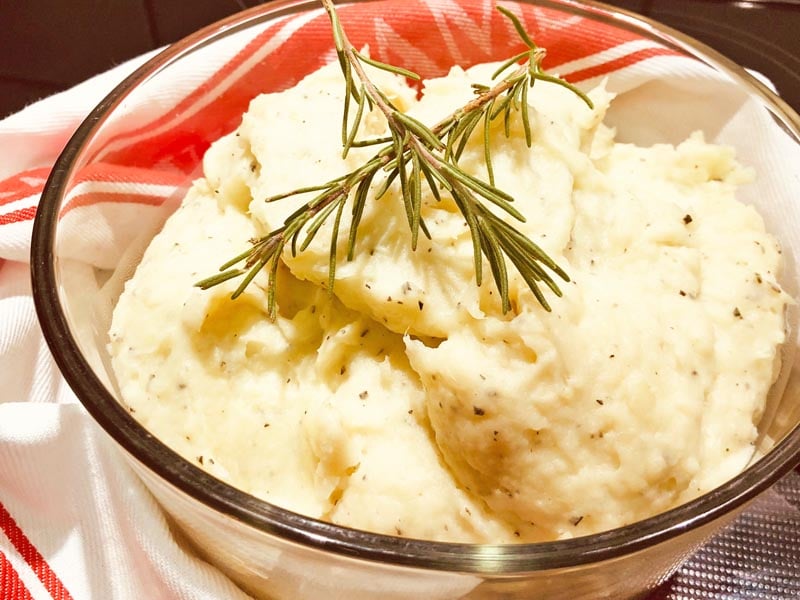 How This Recipe Came About

Yesterday, I created a new sandwich bread that contains rosemary. I tasted the raw dough and fell in love with it. It reminded me of mashed potatoes but with egg. So, I just had to make some rosemary mashed potatoes.

I’ve been trying to use sweet potatoes in place of russet potatoes in most of my cooking just because they’re healthier for me. It really depends on your dietary needs. Check out the below chart and choose the ones right for you.

The photo above represents mashed potatoes with a small amount of rice flour. the flavor was excellent before and after the flour addition. But the sweet potato flavor was milder with the flour and the potatoes were sturdier. My husband described the final recipe as “creamy”.

I remember a number of times being in a restaurant and having the wait staff report back to me that their mashed potatoes are not gluten free because they add flour. So, I have been wondering why they would add flour. I suppose they either believe that flour will make the potatoes fluffier and sturdier (which it does) or they accidentally added too much milk (or other liquid) and needed a quick fix. Flour will absorb the additional liquid. But is it healthy?

How to Properly Add Flour to Mashed Potatoes

Just like gluten flour, uncooked rice flour contains bacteria. Cooking or baking kills much if not all of that bacteria. In addition, uncooked flour is difficult to digest, providing you with another reason to cook it. There are two methods to cook flour when adding to mashed potatoes.

If you’ve already made your mashed potatoes and you wish to thicken it because you added too much liquid or overcooked the potatoes, flour will work but is not the only option. Once you add the flour, you’ll have to cook the mashed potatoes again. Return the mashed potatoes to the saucepan and cook over at least medium-low heat for 2 – 5 minutes, stirring constantly to prevent sticking. Allowing up to 10 minutes for resting also allows time for the rice flour to soften. Add additional liquid if too much evaporates.

Not Adding Any Flour to Runny Mashed Potatoes (My Recommendation):

A third option for thickening watery mashed potatoes, but more time consuming, is to omit flour all together. Instead, cook the mashed potatoes over medium heat, stirring constantly until much of the water evaporates and the potatoes become thick again.

If I have time, I’m going to mix an egg in some and bake it. I think I’d like that even more! That would also make wonderful potato pancakes. You just add some egg to cold, leftover, mashed potatoes and shape them into patties/disks. Then fry them in butter/margarine on both sides until golden brown.

How Many Pounds of Potoates Per Person

The recommending serving per person is 1/2 pound per person. However, add more for heartier eaters.

Rosemary mashed potatoes are the perfect balance of sweetness and savoriness. They make a lovely combination you and your guests may not expect but will savor.
Servings 5