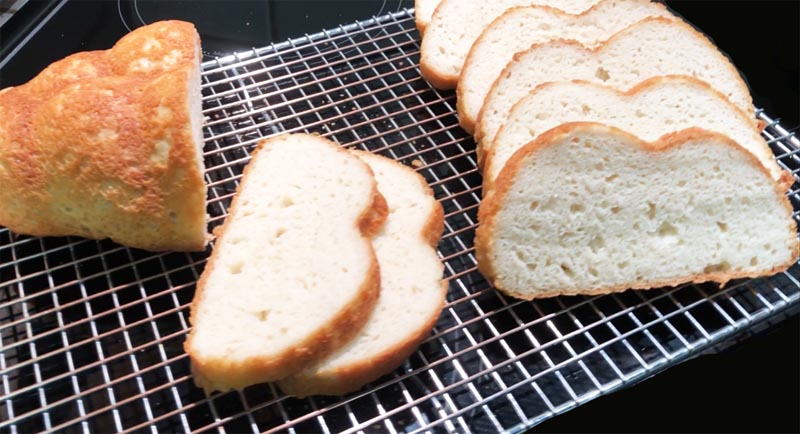 I ordered this Braided Mold Loaf Pan thinking I would need it for a sweet, Italian bread I was planning to make for Easter. However, it dawned on me that this pan would be perfect to make the process of making French bread much easier, and more attractive. I don’t know how attractive you think it looks, but it sure was convenient. It really did make the entire process easier and more aesthetic. To give you an idea of the size of this pan, a standard 9 x 5-inch loaf pan holds 7-1/2 cups of liquid. This pan holds 6 cups. If this pan continues to be out stock, be sure to use a similar pan but be sure it is metal not silicone.

You can add the dough to a Ziplock gallon-size bag and cut about one inch off of one of the bottom corners. Then pipe the dough onto the French bread pan. You can also use a baguette pan and make two baguettes. Of course, the baking time will need to be reduced. I haven’t tried this yet, but will and then type a new recipe.

If you use a perforated French bread pan, use the method above in the French Bread Pan, but line the bottom of the pan with parchment paper.

If you want that French bread appearance with the round bottom, you can improvise by making a mock French bread pan.

To make a double recipe/two French loaves, lay oven-proof jars on their sides (that can withstand up to 450ºF temperatures) down the center of the length of the roasting pan. (Canning jars without lids work perfectly.) (Ideally, when the jars are on their sides, they should be as tall as the sides of your roasting pan, but a little higher won’t hurt.) You want to create a wall down the center of the pan which will form a divider. Lay sheets of parchment over the jars, leaving plenty of overhang on the left and right sides of the pan, creating two hammock-like cradles between them. Push the paper down on the left and right sides of the jars to form the two hammocks/pockets where the dough will lay. Use binder clips to keep the parchment in place by clipping them to the sides of the pan.

The last option would be to use a standard 9 x 5-inch loaf pan. You may need to bake the bread a little longer, perhaps adding as little as 10 minutes to the current time and as much as 20 minutes. I haven’t tried this yet.

I tried a second version of this loaf without the baking soda, but the crust was not nearly as crunchy. Mind you, gluten free bread won’t stay crusty. However, it was evident that the baking soda made a huge difference. The reason why I wanted to try omitting the baking soda was due to too much leavener. On the original loaf, the current recipe, the top of the bread did not stay fully risen during baking.  This is an indication of either too much liquid or leavener. In this case, it was too much leavener. It obviously didn’t fall much because there was no solid mass of condensed dough at the bottom of the loaf. However, I always strive for perfection.

In the second loaf, I tried a technique I haven’t used in a few years. I beat the egg whites to soft peaks, set them aside, and then beat them into the dough after mixing the dry ingredients into the wet. I really do think that helped give it the oomph that tapioca provides, without the gumminess. So, I incorporated that idea into the final recipe though I haven’t used it in the final recipe.

In the final recipe, I decided to reduce the yeast by 1 teaspoon just because I know the leavener needs to be reduced. I will make this bread again, and update any changes I deem appropriate. If it truly does rise higher, I will update the photo as well. So, definitely check back soon!