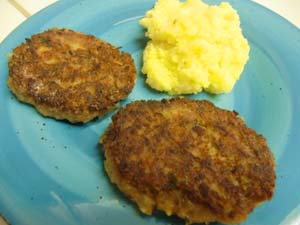 My 97 year old father, who is an expert on fish and seafood loved these gluten free crab cakes, and he’s not even on a gluten free diet! He’s been eating fish and seafood practically ever since he could eat solid food. His father used to fish in Alaska, professionally, and my father has lived in the Fishermen’s Wharf area of San Francisco all of his life.

Ad
[showmyads]
It’s a funny story how this recipe came about. I went grocery shopping while he sat in the car. I went back to the car, loaded up the groceries, sat down and before I started up the car, I said, “Guess what I bought? Fresh crab legs!” He’s terminally ill and he’s been in the mood on and off for crab cakes. (I planned on making gluten free crab cakes, without his knowledge. He seems to do very well on the diet. He has stomach cancer.) He became so upset, shouting, “Where are they going to get fresh crab around here? Where’s the ocean? Maybe they can get some bass.” (We live between Yosemite National Park and Fresno.) I explained to him that it was fresh/frozen. He said, “That’s not fresh!” I told him I had asked for fresh and the butcher pointed to 2 packages, and stated it’s the only crab, besides imitation, they had. Dad added, “And it’s probably Alaskan crab! If it’s not fresh, it isn’t any good!” Still very displeased, I heard about it for the next 5 minutes on half the drive home. I told him I’d just throw it out. He said, “No.”

Obviously, he didn’t want any crab cakes that day, and I was afraid to even ask the next day. So, since you can only keep crab in the refrigerator for about 2 days, I cleaned it and froze the meat (wrapped in parchment paper; placed in a freezer bag) on the second day.

Several days went by while I created a recipe I felt he could tolerate, yet full of flavor. Today, without his permission, I made them. He noticed I had been in the kitchen for quite some time, prior to lunch. So, when he sat down he asked, “What do we have today? Something special?” I cautiously answered, “Yes. Crab cakes.” He did not reply. I explained to him that there is so many other ingredients that he probably wouldn’t be able to tell the difference. That seemed to make sense to him, but again, he did not reply.

He took one bite. I asked him, “How are they?” He didn’t answer, but went for a second bite. You see, when my father really enjoys something, he doesn’t have time to talk, he’s only interested in eating more. He took another bite. I asked again, “How are they?” He said, “Good, good!” as he continued to eat.  He continued eating, barely touching his favorite creamy polenta. I knew then that my gluten free crab cakes were a success!

I hope you enjoy them as much as Dad did! He’s asked to have more for dinner tonight. I think I’ll make smaller ones for my Christmas party! If you like your gluten free crab cakes spicy, add some pepper flakes and/or hot sauce. Replace any of the spices with your favorite spices: cumin, thyme, etc.