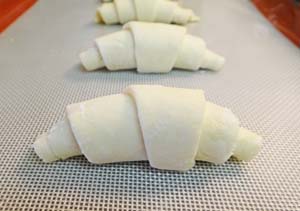 One way of working around the lack of thin phyllo dough sheets is to make homemade phyllo dough with alternating layers of butter and dough. Use it to make traditional baklava and other sweet or savory recipes that require multiple layers of phyllo dough.

While it is spelled three different ways, filo, fillo, and phyllo, it is a super flaky and buttery dough, usually used for croissants, baklava, and other pastries. I have a Gluten Free Phyllo Dough Recipe that I developed over two years ago, but it is a simple version of this laborious task. While it was fine for a quick, flaky crust, it is a flaky pie crust. Everyone raves about it.

However, with all of the requests for a closer to the real thing gluten free phyllo dough recipe I have received over the many years, I thought it was time to create one. We’ll never be able to duplicate phyllo dough made with gluten. This gluten free version is similar to Julia Childs croissant dough and makes an excellent substitute for gluten phyllo dough.

I used this mock gluten free phyllo dough to make Flaky Gluten Free Croissants. You can get it to crisp more like phyllo dough by baking it in a container that is more open on the sides, rather than up against a baking dish edge, and omitting the yeast. Baking for extended periods also creates a flakier, crispier dough.

While never having made homemade gluten free phyllo dough or a gluten one for that matter, the one thing I can tell you is that this recipe is not for a beginning baker.

I started with half a recipe of Julia Child’s Phyllo Croissant Dough, using my gluten-free all purpose flour blend, which calls for superfine rice flour, added additional milk and yeast, and rolled the dough thinner.

It takes a lot of time and effort to make homemade gluten free phyllo dough, but it was worth every bite!

Read the instructions and all of the above material all the way through before making this dough. This phyllo creates multiple layers of dough that slightly separates when baked, creating a flaky delight. It is a buttery gluten free phyllo dough that you can use for croissants, baklava, and both sweet and savory recipes.

Use this dough to make Gluten Free Baklava.

For a savory use, use this rolled dough as a substitute for several layers of traditional phyllo dough to make spanakopita, a delicious Greek dish. The filling consists of a mixture of cooked spinach, Feta cheese, green onions, butter, olive oil, and raw egg. You may use the filling to create triangular-shaped pastries or alternate layers of the dough and mixture in a casserole dish.