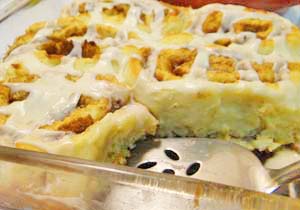 After much anticipation, I present to you my fluffy gluten free cinnamon rolls recipe! In about two hours, you can have warm, fluffy, buttery cinnamon-filled cinnamon rolls. They’re to die for! Many people liken the texture to cake. If you prefer a traditional texture cinnamon roll, check out the Gluten Free Cinnamon Raisin Rolls recipe (raisins optional).

I had posted a gluten free cinnamon rolls recipe a couple of years ago, and have been trying to make a fluffy version ever since. I tried about 4 or 5 different methods, none of which worked well. I had been under the impression from a cookbook that I had read early on that raising gluten free dough twice is senseless. Well, I learned that this statement was not true. The second rise for cinnamon roll dough is the key to making them fluffy and light. I plan on experimenting with this recipe by using my Gluten Free All Purpose Flour Blend Recipe. When I do, I’ll update this recipe. I hope you enjoy it.

Need help learning how to roll this soft dough? Check out the below video. Then, proceed to the below recipe. A fluffy gluten free cinnamon rolls recipe close to the gluten version, if not lighter, and they are healthier with the use of some whole grain flour.

For the Cinnamon Rolls:
For the Filling:
For the Cream Cheese Icing:

*Instead of using cream cheese and milk in the glaze, you may use the following ingredients: 1/2 cup confectioners’ sugar, 2-1/2 tablespoons heavy cream and 1/4 teaspoon vanilla. Whisk them until creamy. Cream cheese may also be substituted with 1 tablespoon shortening.

**Rising times will vary depending upon the temperature of the environment. If your home is cold, use your oven to rise the dough. Preheat oven to the lowest temperature possible, 170 - 200°F. Turn off oven, and place the dish on the center shelf. Leave the door open until rising is complete.