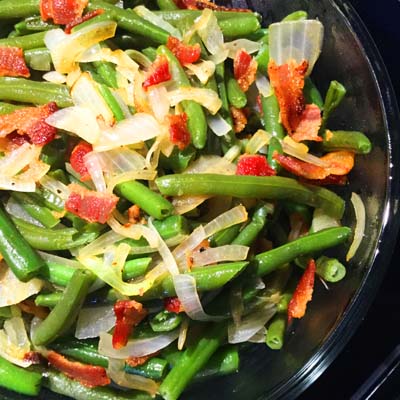 While green beans are gluten free, not all brands of bacon are. I’ve been making this bacon and onion green bean casserole during the holidays for decades. It’s my favorite dish that I just can’t live without. My family loves it because I don’t skimp on the bacon. There’s nothing worse than being one of the last ones to dig in and have to dig for bacon. I hope you enjoy this recipe as much as my family has.

Note: I use three different brands of uncured bacon that is free of nitrates, nitrites, and other chemicals. I list them in the below recipe.

It's true that almost everything's better with bacon. Green beans are no different. The almost caramelized onion makes them even better.