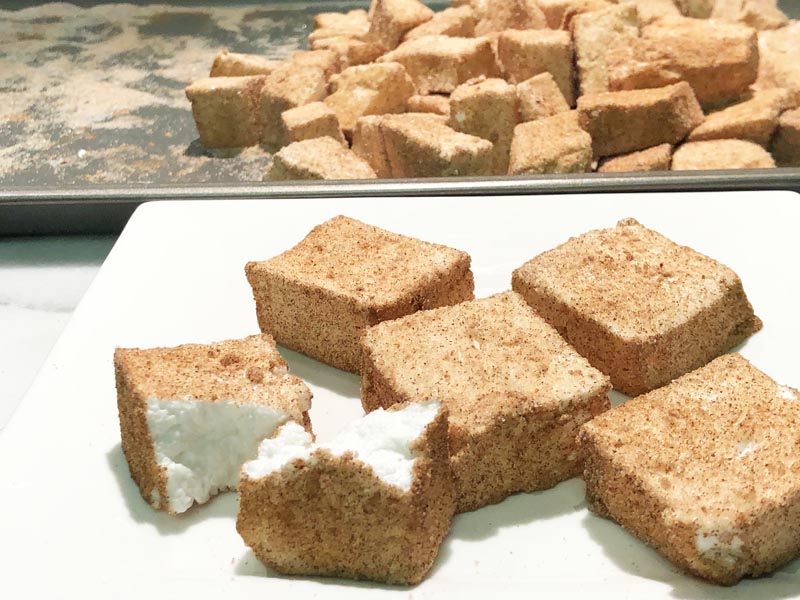 There is nothing like homemade marshmallows. They are softer and more flavorful. Think marshmallow fluff but sturdier, and they can be turned into any flavor you want. The Cinnamon Churro Marshmallows flavor is made up of cinnamon-flavored marshmallows with a crunchy sweet cinnamon texture on the outside. They’re unique and addictive. Unfortunately, this flavor of Smashmallows brand is not gluten free. So, take the time to make them yourself. It’s pretty simple. You have to try this recipe at least once.

Calories in the Homemade Version

Each 1 x 3/4 x 1/2-inch piece is only 14 calories. Plus, there’s no fat in marshmallows, making it great for a weight-loss treat. Can you tell that I’m excited? I am! These are really good! I’m going to try my strawberry idea next. (See the Tips section below for multiple variations.) Enjoy!

The Cinnamon Churro flavored package of Smashmallows lists “malt” in the ingredients list, which usually indicates that it contains gluten (barley to be exact). However, some other flavors appear to be gluten-free such as the strawberry flavor.

You can purchase Smashmallows at Target stores offers the Cinnamon Churros flavor for $3.79 for each (4.5 oz.) package. Vitacost.com offers the same size for $3.22 each. Then, Amazon offers 12 (1.15 oz) packages for $41.16 (that’s $3.43 for very small packages with free shipping). Just read the labels carefully to avoid any gluten-containing versions. So, all-in-all, not only do you save tons of money by making them yourself, but you can make multiple variations and flavors. Your friends will be making requests. Just wait and see.

Homemade Cinnamon Churro Marshmallows taste like cinnamon in the inside and have the texture of churros on the outside. They're so addictive!

For the Cinnamon Sugar:

To Make the Cinnamon Marshmallows:

To Make the Cinnamon-Sugar Coating:

Churro Cinnamon Rice Treats: Add some gluten free crispy brown rice cereal to the cinnamon sugar for a crunchy version.
Strawberry: You can use LorAnn Strawberry Emulsion (which will turn the marshmallows light pink) in place of the cinnamon and roll them in a mixture of crushed dehydrated strawberries (from Trader Joe’s) and sugar.

Vanilla: You can replace the cinnamon emulsion with additional vanilla extract and dust them with powder/confectioners’ sugar.

Chocolate: You can make the marshmallows as is with the cinnamon emulsion and then dip one side in n melted gluten free chocolate to make a cinnamon-chocolate flavor. You can also coat the chocolate with minced nuts of your choosing.

Shortbread: Replace the cinnamon emulsion with more vanilla extract and roll the marshmallows in crushed gluten free shortbread. Or, dip one end in melted chocolate and then in shortbread crumbs.
Others: Use other LorAnn Oils emulsions to make your favorite flavors from root beer (which will create a root beer float flavor) to pumpkin to cheesecake.