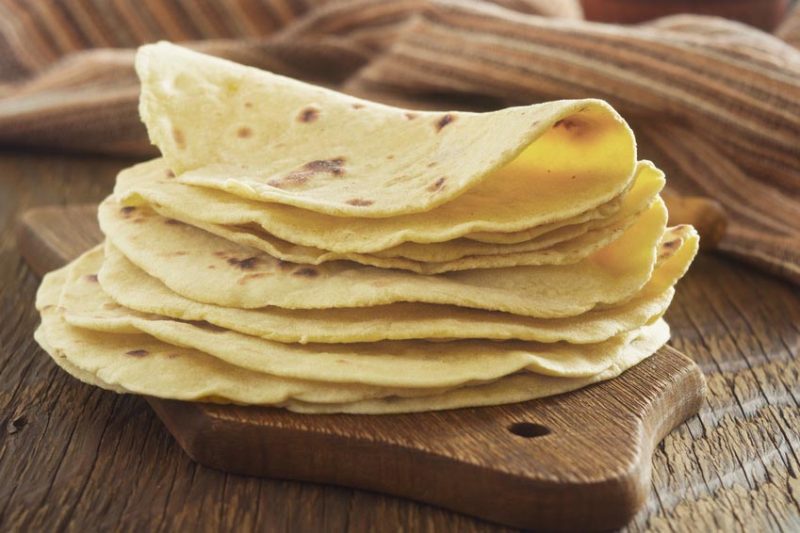 The tortillas are made primarily with masa (a corn flour treated with lime).
I found it at my local grocery store, Raley’s. There is a recipe on the masa harina package, but Viva Vegan! included a unique recipe which is the one I used. I liked it because it contained less mesa flour, making them moister.

How I separated the balls evenly was by rolling the dough into a 12″ log and then cut 1″ cubes, then rolled them into individual balls. If you wish to make larger tortillas I suggest rolling them into a 10″ log and cutting 1″ slices.

I was able to make the dough hours ahead of time and then cover the dough with a damp cloth while in a bowl. This was very convenient since you need to serve the tortillas as soon as they are all cooked. I really appreciate the tip to wrap the cooked tortillas in a material napkin to keep them warm, as well.

The original recipe on the package called for 2 cups of masa and 1/4 teaspoon of salt, but Terry’s recipe calls for 1/2 teaspoon of salt and 1 1/4 cups of masa. I just used 1/4 teaspoon of salt with the 1 1/4 cup of masa, making it lower in sodium. Our family used to use store bought flour tortillas, but they were so high in sodium that we stopped using them. Plus, I was able to use sea salt which is lower in sodium compared to regular salt and much healthier for you, as I have read it is supposed to rid your body of water retention. I haven’t read any studies on this, though.

I used a tortilla press which I purchased on Amazon fairly inexpensively, but it is a steel one and will last a lifetime! You may also purchase less inexpensive, aluminum ones.

A recipe for soft corn tortillas which are naturally gluten free, and may be made thin.