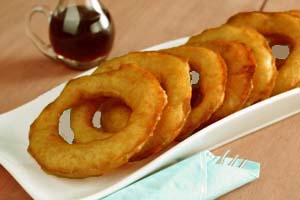 I have been wanting to make some yeast raised gluten free donuts, but was so excited when I discovered picarones. They are also risen donuts, but made with a sweet squash (pumpkin in this case) and sweet potatoes. They are also known as Peruvian donuts as they are popular in Peru. You can make these gluten free donuts using fresh or canned pumpkin. Just note that fresh pumpkin tends to vary in moisture and may not turn out the same. Meanwhile, enjoy these delightful treasures. Picarones leave a lasting impression to tourists who visit Peru.

Yeast raised gluten free donuts made with pumpkin and sweet potatoes. A Peruvian favorite, served with a molasses or maple tropical cinnamon syrup.

Though aniseed is in traditional picarone recipes, I am not a fan, therefore, left it as an option.

A traditional ingredient used in the syrup is molasses. You can replace the molasses with pure, organic, maple syrup, if you are not a fan of molasses. If you prefer, you can also use a light flavored molasses or substitute some of the molasses for dark brown sugar.